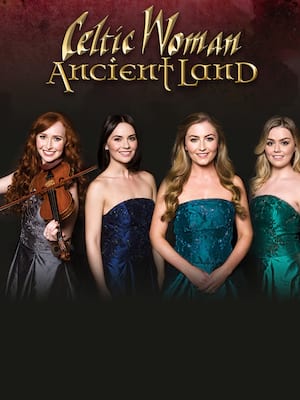 The unique musical ensemble Celtic Woman has emerged as both a genuine cultural phenomenon and a spectacular commercial success.

Described as "Riverdance for the voice", this truly Irish ensemble takes their influences from the likes of Enya, Moya Brennan and Clannad, with their unique spin on traditional songs and modern pieces earning them 10 million albums sold worldwide since their inception. Their current lineup includes vocalists Mairead Carlin, Eabha McMahon, Megan Walsh and Tara McNeil on fiddle.

First formed in 2004, Celtic Women's success has seen them through rotating line up of peformers, which began with Chloe Agnew, Orla Fallon, Lisa Kelly, Meav Ni Mhaolchatha and fiddler Mairead Nesbitt. Ancient Land marks their 13th studio album and is replete with traditional Celtic songs alongside standards from around the world, including Shenandoah, The Moorland Shore and Mna Heireann.

Sound good to you? Share this page on social media and let your friends know about Celtic Woman at Alexandra Theatre.