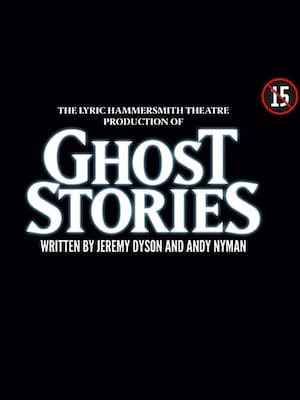 An immaculately crafted evening of entertainment. Play the game and you'll have a scream.

Keep telling yourself it's only a show

Join the lightly cynical parapsychologist Mr. Goodman, whose life's work is dis-proving the tales of ghostly activity he investigates. Except there are three cases that have him flummoxed...

This is the chillingly terrifying scream-fest Ghost Stories from Jeremy Dyson and Andy Nyman, the men behind the darkly comic League of Gentlemen and the mind-twister Derren Brown. Following on from the sell-out engagements all over the world and a smash hit film, it's ready to scare a whole new crowd on its first ever UK tour in 2020!

Prepare to be taken on a thrilling ride, where tension is stretched time after time, before stinging, sudden shocks elicit squeals. Ghost Stories is a gripping and undoubtedly spooky spectacle, from creators who know their genre.

Things that go bump in the theatre

It would be poor form for us to spoil the secrets of Ghost Stories, but we can tell you there are 3 stories, that of a lonely night-watchman, a young driver out for a jaunt in the woods and an expectant father who starts to hear things go bump in the night. All we can say is that this is a guaranteed crowd-pleaser, an inventive use of theatre that will scare the living daylights out of you.

Please be advised that Ghost Stories contains moments of extreme shock and tension. The show is unsuitable for anyone under the age of 15. We strongly advise those of a nervous disposition to think very seriously before attending.

80 minutes with no interval

What can I tell you about Ghost Stories, London's new favourite spine chilling scare-fest playing at The Arts Theatre? Well, as it turns out, not a great deal. The show ends with a disclaimer...

Not being a huge fan of ghost-stuff myself (I went to appease a friend),... more

Read all reviews Write a review

Sound good to you? Share this page on social media and let your friends know about Ghost Stories at Alexandra Theatre.