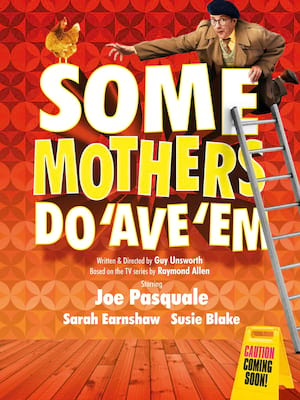 Some Mothers Do 'Ave 'Em

...each of the performers' pinpoint timing and easy interplay make this a winner. And there's not a whoopsy in sight.

Why See Some Mothers Do 'Ave 'Em?

Based on the beloved British sitcom that ruled the small screen for most of the 70s, the smash hit stage musical Some Mothers Do 'Ave 'Em is back by popular demand after a highly acclaimed tour in 2018. Returning in the Spring of 2020, the production sees the coming together of a cast and creative team including up and coming British director Guy Unsworth, celebrated stand up comedian/actor Joe Pasquale, Coronation Street favorite Susie Blake and West End regular Sarah Earnshaw.

A show that's set to bring the house down, quite literally, Some Mothers Do 'Ave 'Em follows the misadventures of loveable and accident-prone anti-hero Frank Spencer and his long suffering, but ever tolerant wife Betty. Catch phrases, DIY mishaps and brilliant theatrical stunts abound when Betty attempts to tell Frank she's expecting. But Frank's obsession with becoming a magician, plus visits from her mum, a priest and some TV producers wires become crossed with hilarious results.

Seen Some Mothers Do 'Ave 'Em? Loved it? Hated it?

Sound good to you? Share this page on social media and let your friends know about Some Mothers Do 'Ave 'Em at Alexandra Theatre.